You have crested the hill and gone beneath the familiar arch and are descending into the little city of Frankfort...so many friends and familiar faces are waiting to welcome you and yours.

Well, this year there is an abundance of not-so-familiar faces also waiting for you...call it a cast of thousands...in the various forms of one of the most prolific orders of life on earth….the rodents. Defined largely by their pairs of constantly-growing incisors, rodents in North America run the gamut from tiny deer mice....an abundant species here...all the way up to the master of northwoods dam construction, the beaver, which can approach 70 pounds in remote areas of its range.  Let’s focus on the li’l fellers that scratch around at night along Lover’s Lane, making the dead leaves rustle on the forest floor and occasionally blurting high-pitched squeals and hollow “tocks” as they go about their gnawing existence.

This is what wildlife biologists refer to as an “irruption” year.  Several factors - life cycles, a very mild winter, an abundance of last fall’s bounty of acorns and beechnuts and pin cherries - collide to produce skyrocketing numbers of the buck-toothed brigade.  It’s an up-and-down sort of thing. This year the explosion of rodents guarantees that every fledgling predator born this year - barred owl, screech owl, fox, bobcat, coyote, red-shouldered hawks and Cooper’s hawks - will be well-fed and prosper.  Next year the odds will flip. More predators, less fodder for their nestlings.

For many of us, opening up the cottage upon arrival is a joyous affair. Sweeping aside the sheets that draped the furniture, taking down the shutters and opening the windows to chase the seasonal musty odor.  This year, parts of those sheets have been gnawed away and used to make mouse nests, often in places that surprise us - inside your gas grill (better check it first before you fire it up!), under your kitchen sink and inside a small tear in the corner of the customary old mattress on the rollaway that is rarely used.  And that musty odor is mingled with another smell, a noxious, fetid stench that signals death and decay on a rodent-sized scale.  Finding that bit of rotting matter can be difficult. If there is a positive side, it is that the amount of the decay is small and clears up rather quickly.

So, who are we talking about?  In the woods of northwest Michigan, the primary players are deer mice and white-footed mice (very closely related), the woodland vole, which generally plays nice and stays outside, and chipmunks and red squirrels.  We have other fascinating rodents which usually don’t cause too many problems - the northern flying squirrel with its jumbo dark eyes and soft-as-chinchilla fur, and the woodland jumping mouse, sort of like the kangaroo rat of the desert, usually only seen at night in the headlights as you come home on Alden Edwards and catch a glimpse of a tiny, bounding mouse. Grey squirrels (and the common color-phase black squirrels) and fox squirrels are likewise off-the-charts in numbers this year, but, as a rule, the only problems they cause are at bird feeders. 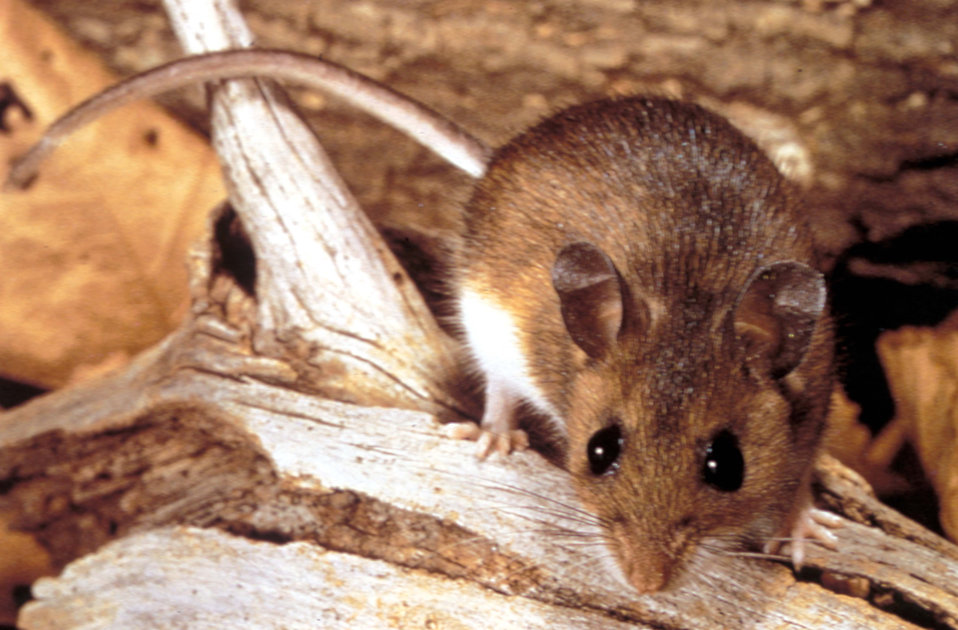 Our two mouse species love the mix of woods and your home, especially the many porous, old cottages that provide many avenues of entrance and adventure. It doesn’t take much more than an opening of ¼ inch to signal the “welcome” mat.  Mice are climbing sons of guns. Earlier this summer I went to fill a hanging squirrel-proof (really, no kidding...at least, so far…) bird feeder, 6 feet above the ground when under the lid a deer mouse gave me that look, “Nuthin’ to see here, mister!” before leaping to the ground and scurrying into the wood pile. Mice love boating, too...well actually, they love boats, and show amazing ability to get inside them, gnaw on battery cables and sails and soft, chewy lifejackets and boat seats.

Chipmunks and red squirrels are closely related, but as far apart on the personality spectrum as two cousins can be.  The eastern chipmunk is as cute as a newborn fawn - agile, tame, inquisitive - a terrific fighter when it comes to breeding season, which is about every other day (not really, but it seems like it).  Big eyes, big teeth, big cheeks, packed with sunflower seeds.  They tend to stay out of your home but love garages with open doors and stored dog food and bird seed.  They also burrow around your foundation and in your flower beds.  If they were as homely as star-nosed moles (seriously, look it up) we would despise them, but they aren’t, so we tend to give them a pass.  Usually! 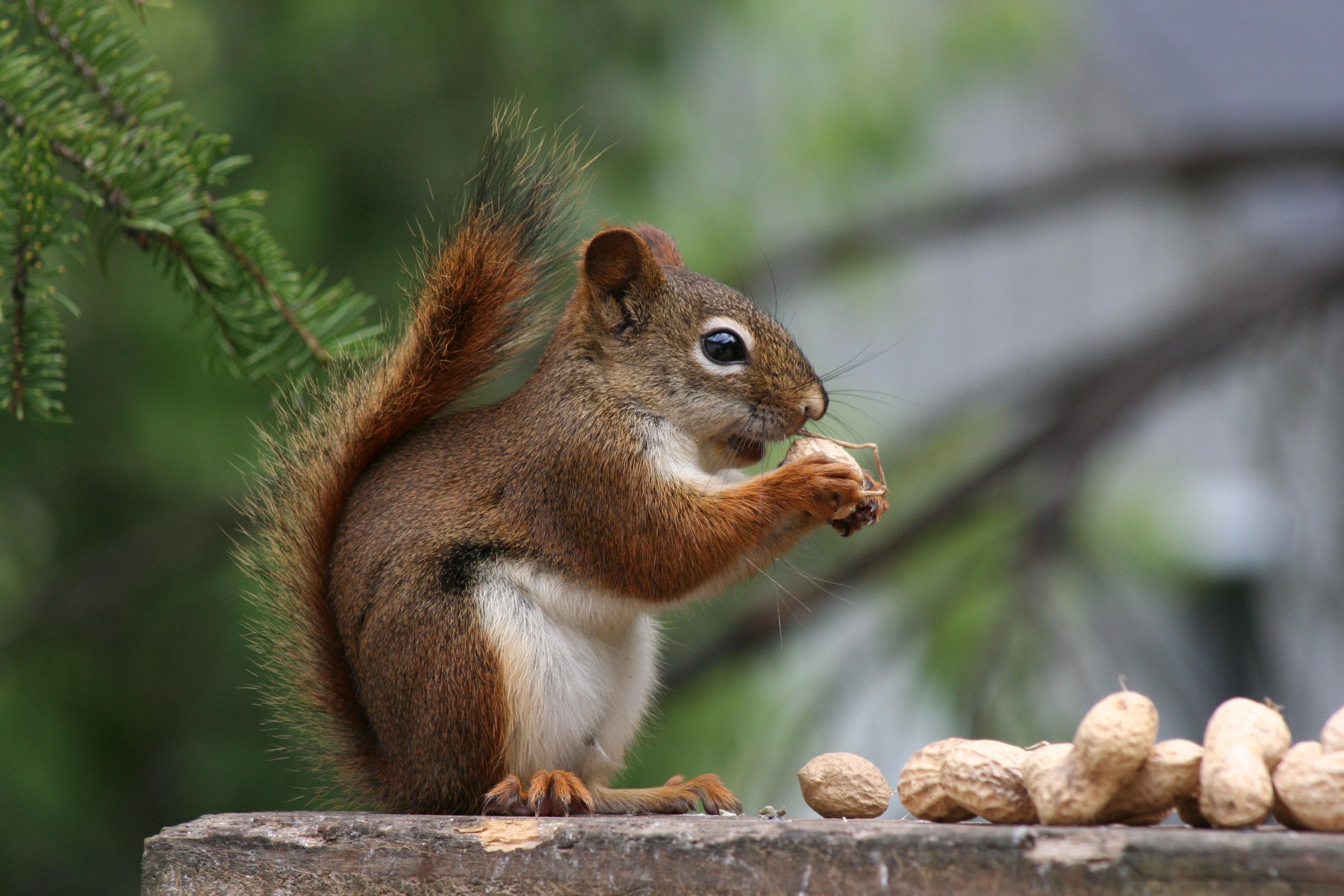 Red squirrels are the pirates of the mixed northern hardwood forest, a scourge to all.  When a red squirrel decides that it disapproves of your presence, the noisy, chattering invective will drive you away. If it could be translated into English, I dare say the air would be blue.  They are super-rodents, in that they also love small nestling birds for a meal along with sunflowers and acorns.  They love the great indoors, as well, and a red squirrel that spends time in your cottage will shred everything it can and eat the insulation in your ceiling.  Trouble on a stick!

What can we do?  There is an abundance of pest control businesses that offer their services, usually in the form of enclosed “traps” that provide permitted poison to rodents small enough to enter and exit the trap.  Granular poison provides similar control but needs to be confined to areas where birds and pets cannot get to it.  Both poison alternatives pose a real threat in the form of collateral damage, when a predator eats a poisoned rodent and may get a sufficient dose to make it sick, or, in smaller predators, kill it.

The most humane approach is the old-fashioned mouse trap and the many easier-to-set modern versions which don’t make you jump when you accidentally set it down and trip it. A little peanut butter on the pan usually turns the trick.  The large size works on chipmunks if they have decided to share your hot tub...meaning, they get inside the works and shred the insulation and eat the wiring.  Red squirrels - good luck!  What we need is a population of pine martens - a species of weasel that forsook the ground for the trees, and are as fast as greased lightning in pursuit of red squirrels - but their range just doesn’t quite stretch to Benzie County.

Best thing to do is not fret about it. Do what you can to mouse-proof your cottage, keep pet food and bird seed out of range, and enjoy the sideshow.  Listen to the tremolo of the screech owls and the hilarious laughter of the barred owls...the distinctive “kee yar” of the red-shouldered hawk and the sharp, sassy bark of the red fox vixen as she gathers little rodent corpses for her kits...and know that Mother Nature will sort it all out.