Black bears are beginning to show a strong presence in our neighborhood at the CSA.  Last year a big boar (male) around 300 pounds or so began tearing up bird feeders and garbage bins in the late summer, fall, and well into winter.  He was active again in late winter after what appeared to be only a brief nap of about a month.  He hasn’t been around this spring - he is probably doing what boars do this time of year, which is look for female bears (sows) to breed. They will roam far and wide in this search for romance, or the ursine version of it. 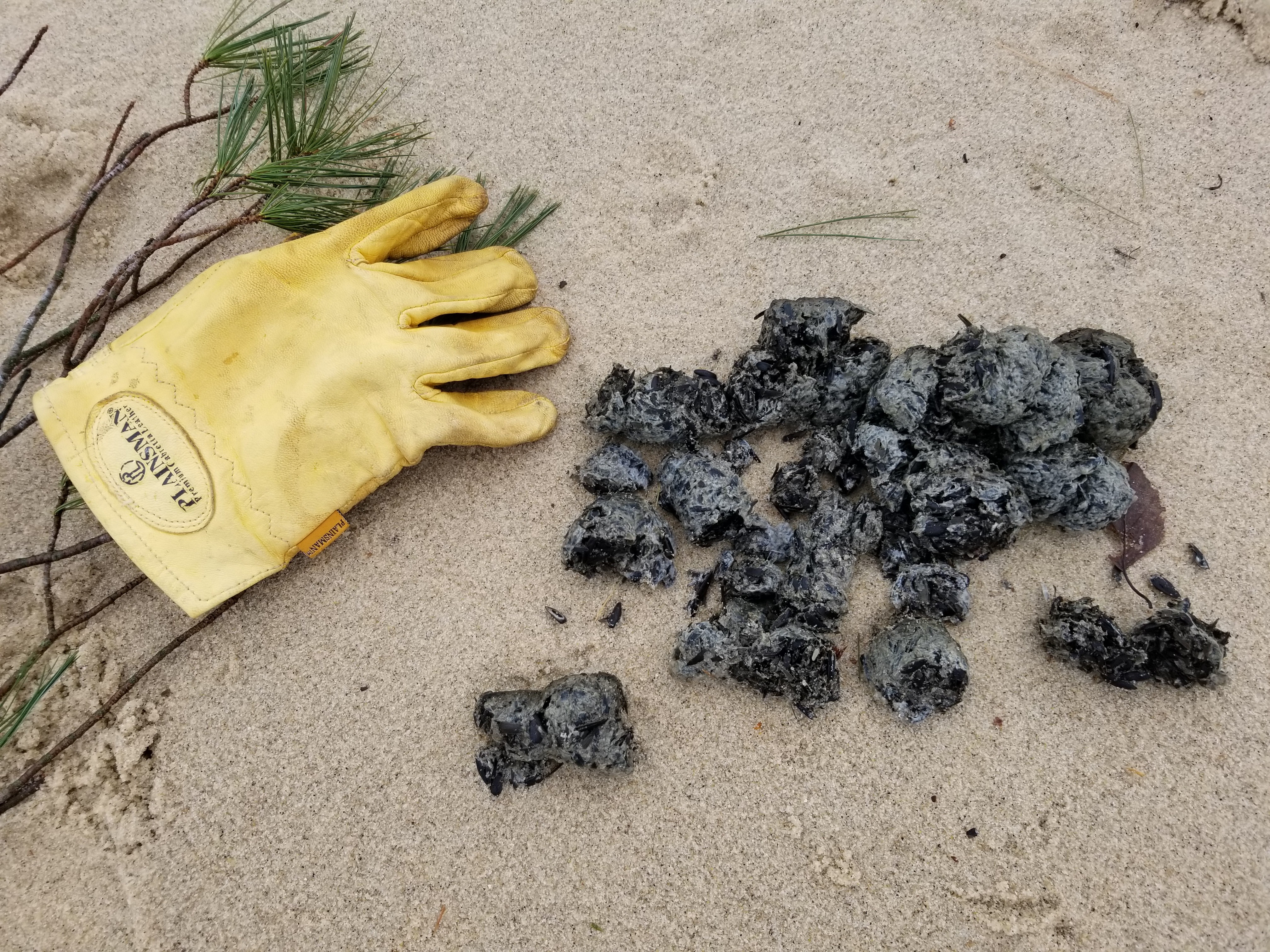 In late March I found a generous pile of bear scat (poop) on the Crystal Lake beach. 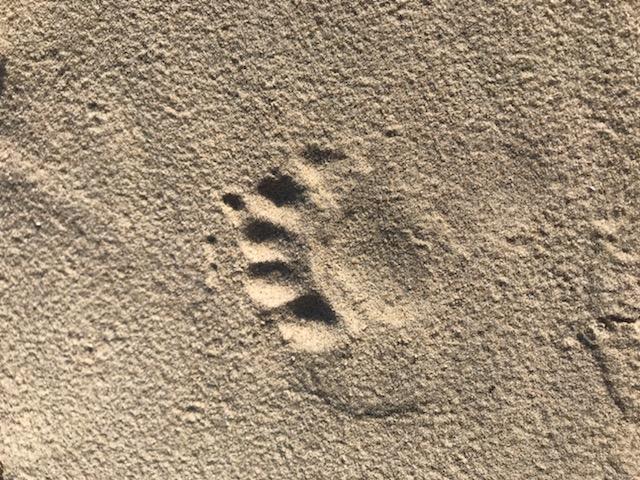 Lately, though, there have been several bears visiting the CSA. Tracks of a sow with what may be two or three young cubs have been noted north along the Lake Michigan beach, and the tracks of what appears to be another sow with a single, year-old cub, have been appearing north from the stairs. 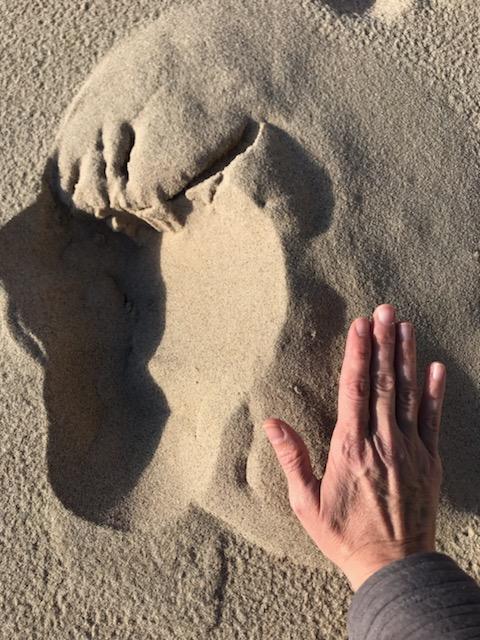 These bears left interesting butt marks in the sand as they slid down the low bluff just north of the Edmonds’ cottage.

The bears are almost certainly foraging on the abundance of small, fresh, dead alewives that are washing up on the Lake Michigan beach (alewives are small anadromous fish which will be another story to be related at a later date: if you are over 45 years old, you probably remember them).

Why the uptick in bear activity?  They are highly adaptable to man and his civilization, are omnivores (more vegetable than mineral), live a long time and have been steadily growing in number over the past 30 years or so since the hunting of black bears went from unregulated in Michigan, to hunting seasons today which are based on modern sound science with lotteries for tags.  They have been expanding their range as well, appearing more and more often in central and even southern Michigan.

Black bears are our only bears, and they are the smallest of their clan.  That said, “small” is a relative term, as a big old boar can top 600 pounds.  They breed in late spring, spend the next six months eating the bounty of nature and agriculture. They thrive in the orchards of Benzie County and make a serious nuisance of themselves in the fruit country, tearing off branches to nosh on apples, cherries and everything else fruit.  The primary element in their diet is plant material of all kinds, followed by insects, grubs, bees and honey. They are indiscriminate diners, eating every form of garbage from diapers to food wrappers and rancid food.  An unprotected garbage bag rings a bigtime dinner bell in a bear’s little brain. So does a well-stocked bird feeder that is within reach.

In early winter bears undergo a subtle metabolic change that leads them, especially the pregnant sows, to seek rudimentary shelter for “hibernation.”  The word is in quotation marks only because it is not a true hibernation, which is just shy of total shutdown of an animal’s bodily functions.  Sows go into hibernation earlier and longer than the boars, because their bodies are telling them to prepare to birth their tiny, hairless cubs.  These little fellers do not resemble the cubs you think of.  They nurse and sleep and develop a cub’s appearance before heading out with the sow into the world in late spring.  Boars are not powered by the same maternal instincts, and often resist slumber as long as there is ample forage (garbage, bird feeders, etc.). Climate change is also certainly playing a factor in black bear behavior.

What does all of this mean to those of us who have moved, unwittingly, perhaps, into black bear country?  We need to share the land, and be smart, and attentive.

The garbage bins which I helped invent are a piece of cake for a bear of any size.  We may have to rethink how we all handle our trash, because a bear that makes a steady diet of food supplied at your home will quickly become habituated to the process and will come to expect an easy meal.  Same goes for bird feeders (I will share my story on that in a future email). Anything and everything we can all do to remove a food attraction will pay off.  A bear that expects the free meal can be a real nuisance, and probably constitutes the single largest threat to our individual safety.

How does all of this affect us, our behavior, and our day-to-day existence? Other than strictly avoiding any feeding attraction for bears, very little.  Black bears will avoid human contact if given half a chance.  A sow with cubs will vacate the area you are in as soon as she smells you (crazy-good sense of smell), sees you (not so great sense), or hears you (ears like antennae).  She will either remove herself and her cubs at 30 mph (yup, 30 mph), or send the cubs up a tree while she retreats and observes.  A boar wants nothing to do with you and will almost certainly detect you long before you see him.

Bears become quite nocturnal in their activities when pressured (like summertime at the CSA).  So, what do we do?  First, be aware of your surroundings as you walk Lover’s Lane or the CSA main drag, especially at dusk and dawn.  Put your phone away and listen and look at what is around you.  If you have company, chat while you walk; the best strategy is to give a bear (or any wildlife, for that matter) advance warning of your presence.  Listen to your surroundings…heck, you might learn something….and allow yourself to enjoy that you are a part (a small part, mind you), of a natural environment that continues to change and expand.