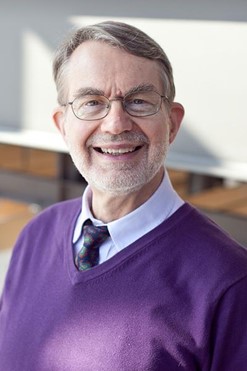 Anyone who has attended a recent CSA Sunday Church Service has heard Dr. Thomas Lymenstull’s stunning piano skills - but his legacy as a musician spans far beyond church pieces. He has taught master classes in Japan, Korea, Singapore, Taiwan, and China, to name a few, and has won plenty of both national and international competitions. But before we get into all that, here’s some backstory on the man behind the piano.

Dr. Lymenstull attended the Eastman School of Music for his Bachelor’s and Master’s degrees alongside his Performer’s Certificate, and the University of Southern California for his Doctor of Musical Arts degree. His career has spanned nationwide, with notable names like the Kronos Quartet and the Los Angeles Chamber Orchestra. He was also an Associate Professor at the University of Southern California and a Teaching Fellow of the USC Center for Excellence in Teaching. In 1998, he chose to stop teaching at the university and moved to northern Michigan to teach at the Interlochen Academy of the Arts, where he still teaches to this day.

For the upcoming Burrows-Getz concert on July 31st, Dr. Lymenstull will perform a set of 24 Preludes and Fugues which were dedicated to him by composer Lin Hua. The set was based on the 24 Styles (or Personalities) of Poetry by an ancient Chinese poet named Sikong Tu (837-908), and takes on the quest of describing the 24 different moods of poetry in various ways. Dr. Lymenstull’s knowledge and experience in Chinese piano music is highly impressive; he even received the Zumberge Faculty Research and Innovation Fellowship from USC in order to research music from China. His program is infused with a deep sense of Taoism and spirituality and will also be filled out with some Chopin and Rachmaninoff.

Dr. Lymenstull will perform his program at the 2021 Burrows-Getz Concert on Saturday, July 31st at 7:30 PM. The concert will be held in the Meeting House and is free and open to the public.