A Cosmologist’s View of the Northern Michigan Sky

Even though he is a Princeton University-trained cosmologist (and now teaches there), William “Bill” Jones says he can still appreciate the 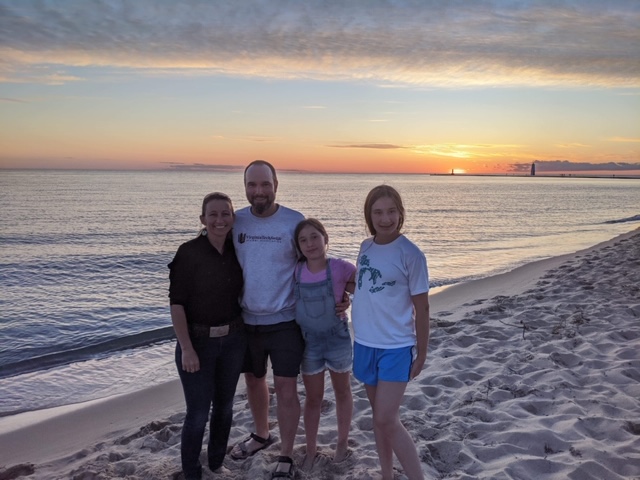 aesthetic beauty of the Northern Michigan night sky. Bill first came up to the CSA in 2001 after he started dating Molly Hood and he jokes that he’s still considered a “newbie.” Though the couple, who have two daughters, now live in Princeton, New Jersey, they still make the haul up to Benzie County every summer. This academic year Bill, who is an associate professor, will be taking on the added role as director of the undergraduate physics program at Princeton this academic year. Sitting at a social distance at one of the picnic tables at the Crystal View Bill talked about his research on cosmic microwave background radiation, why more and more people are finding physics pretty cool to learn about and what the stars in Michigan look like to him. EXCERPTS:

Ginanne Brownell: In very layman’s terms, can you tell me a bit about your research?

I consider myself a cosmologist, which is just a fancy word for run of the mill physicist who is studying things that are best learned by using the universe as a laboratory. You can imagine there's a class of things where it's best to just have a benchtop experiment. And you can run your experiment and you can compare the outcome of that experiment with your theory. But there's a whole class of theories that can't be tested through benchtop experiments, or even here on Earth. This is the case when the energies involved are too high or the scales are too big. For example, if you want to see how gravity behaves on the scale of the entire universe. There's not an experiment you can do on a lab bench to test this.  The only thing you can do is to use the universe itself as a laboratory, which is what we do when we make observations of the cosmic microwave background radiation.

Sorry, but I don’t even know what that means — my physics knowledge is very limited.

Okay, so in the big picture view of the universe the case observationally is that everything in space is expanding right now. And the implication of that, if it's expanding now at some earlier time, the whole place was a lot denser. And when you do that in a quantitative way, based on the measurements that we've made, you can trace that all the way back to the point where the whole universe was a really hot, dense environment. And to a good approximation, the whole universe is just hydrogen gas, like just what the sun is made of. That’s kind of interesting because if you push it back that far, and you look at it, it's all plasma at that point.  We know how plasmas behave so we can make that in a benchtop. And we very well understand the physics that determines plasmas. We know what would happen when we go from that state of the universe when it's all plasma to letting it cool.

How many years ago are we talking about here?

About 14 billion. Based on the measurements we've made we know that what would happen is it would go from that plasma material to a neutral hydrogen gas pretty quickly as it expands. Because it expands and it cools. We know that it would neutralize. And the implication of that is all that light that was bouncing around in that plasma, as it was a plasma as soon as it turns into a neutral gas, that light would just propagate, and there'd be nothing to interfere with it. That means that if we just build an instrument that is sensitive to that kind of light, and look anywhere, we should measure it.  We should find it.

Imagine going from a completely opaque place where if you're a light particle, and you're just scattering around all over the place, just like light

happens, then all of a sudden, everything becomes transparent. And so that light is what we refer to as the cosmic microwave background. Microwave just tells you what wavelength that light is. The prediction is that we should be able to measure this. And in fact, we can. And it's kind of cool, because since it hasn't really interacted with anything in 14 billion years, it's basically a snapshot of what the universe was like 14 billion years ago. And it's pristine, there's been nothing interfering with it. And when you're in any area of physics what you dream about is having a theory that makes a prediction. And it makes a prediction for something that you can measure and that the connection between the thing you measure and the thing you predict is as simple as possible. And that's the beauty about the CMB is that it's so simple, right? It's just a plasma, and then it becomes transparent. And it's a very simple theory.

Is this your theory then?

No, I'm an experimentalist. Smart people have sat down and come up with predictions about what one should measure if you can measure this stuff. We are sort of in the camp of those that go out and make those measurements and try to connect them to the theoretical prediction. The microwave background was first discovered in in the 1960’s. And in fact, the Nobel Prize last year was for that, and it went to Princeton’s Jim Peebles who made a lot of the predictions about what the microwave background can tell us.

Were you all very excited?

Super excited.  He's also the nicest guy in the world. He’s the Dumbledore [the headmaster of the Wizarding school in the Harry Potter books] of physics. Unfortunately, we didn't get to have a lot of the celebrations because of Covid.

There seems to be a greater interest and appreciation for physics lately. Like in the U.K. where I live Professor Brian Cox is a cosmologist who does hugely popular television programs on the universe.

There are a lot of people out there who are extremely well read in cosmology or physics generally. And are just very curious. But there are also a lot of people that for whatever reason, find it too intimidating.  I find that it bifurcates: there are those people who are like super engaged. And then there's other people are like, “Whoa, next! Sounds boring. I hated it in college and I still hate it.”

I didn’t want to talk about COVID but one of the things that I understand many scientists are worried about is that articles on research and experiments are not being peer-reviewed, which normally is the absolute norm and expectation in the science field in general. Is that scary?

This could backfire as people might [then] say, “Oh, well, the scientists don't know what they're talking about, they're totally wrong about the way it was transmitted.” It's like, “Well, they weren't wrong, they just said it’s likely this but we don't know.” And that's not satisfying. And it's easily interpreted as just being wrong and useless. Which is different than just being sort of correct within the error bar.

Moving to a happier subject, tell me a bit about the night sky here in Northern Michigan.

Well, here's the amazing thing. When we look from Michigan, we’ll see much the same sky that others will see from New York or Toronto or wherever, though you are a little bit further north.  But it's more or less the same stars. If you counted all the stars you could see you might get a couple thousand. And all the stars that we see are just in a relatively enclosed area around our sun. If you imagine the galaxy is like extra-large pizza, we are a piece of pepperoni about two thirds of the way out. And if you imagine all the stars that we can see, they're just a little cluster around us. Now that's not to say that they aren't super far away. All the stars that we see are just mind bogglingly far away from us. But that just tells you how big the pizza is. Most of my research has to do with not seeing what's in our galaxy, it’s of trying to look out of our galaxy, away from all of our stars, to try and see the more distant objects behind it.

Actors will say it’s hard for them to watch plays without critiquing the acting, and chefs will say they don’t like to eat out because they are analysing the food and ingredients too much. As a cosmologist, can you ever just look at the night sky here at the CSA and enjoy it?

Absolutely. It’s gorgeous.  The greatest thing, in my opinion about astrophysics is just the variety of absolutely beautiful phenomena that are out there. And you can take a picture of a planetary nebula, which, you know, there's a lot of interesting physics going on there. But they're also just gorgeous. It's like looking at a really intricate flower and it's just another one of nature's creations and that’s absolutely beautiful.