Citation for Long and Valued Service to the Assembly, 2018

Most of the population of the CSA is aware that it is the voluntary contributions of many people that allows our beloved CSA to continue to provide the place, the activities, and the nurturing spirit which we all experience in our time together here. Many of us are not in a position to observe the contributions made by certain people who step up to help in various ways, lending their help with something they feel could be good for the community at large. Sometimes this involves an ability to sense when and where something needs to be restored, provided or improved upon. Such people volunteer quietly and without fanfare as they provide their energies and expertise, in order that this improvement will come to fruition. They rarely are interested in a lot of fuss and fanfare. They make their contributions working towards a goal, individually, as part of an ad hoc group, or possibly on established committees at the Assembly.

One of the tenets that hasn't changed is the spirit of giving back to the community. Volunteering is what "makes the buggy run." (This could also be stated as The Assembly Way.) This is a special place, filled with special people, and we are all better people for being a part of it. Our recipients feel that "The least that any of us can do to show our fondness and appreciation for this nurturing place, is to share a bit of our time, talents, or intellect back with the community, from which we benefit so greatly."

Our recipients preferred that we not make mention of their rather long list of a lifetime of volunteer contributions to the Assembly community. In respect for their request, that will not be iterated today. It is with great pleasure and appreciation, that I have the privilege of presenting the Citation for Long and Valued Service to two people who have, year after year, done their part to "make the buggy run" here at the CSA, Jay and Anne Burt.

Citation for Long and Valued Service to the Assembly, 2017 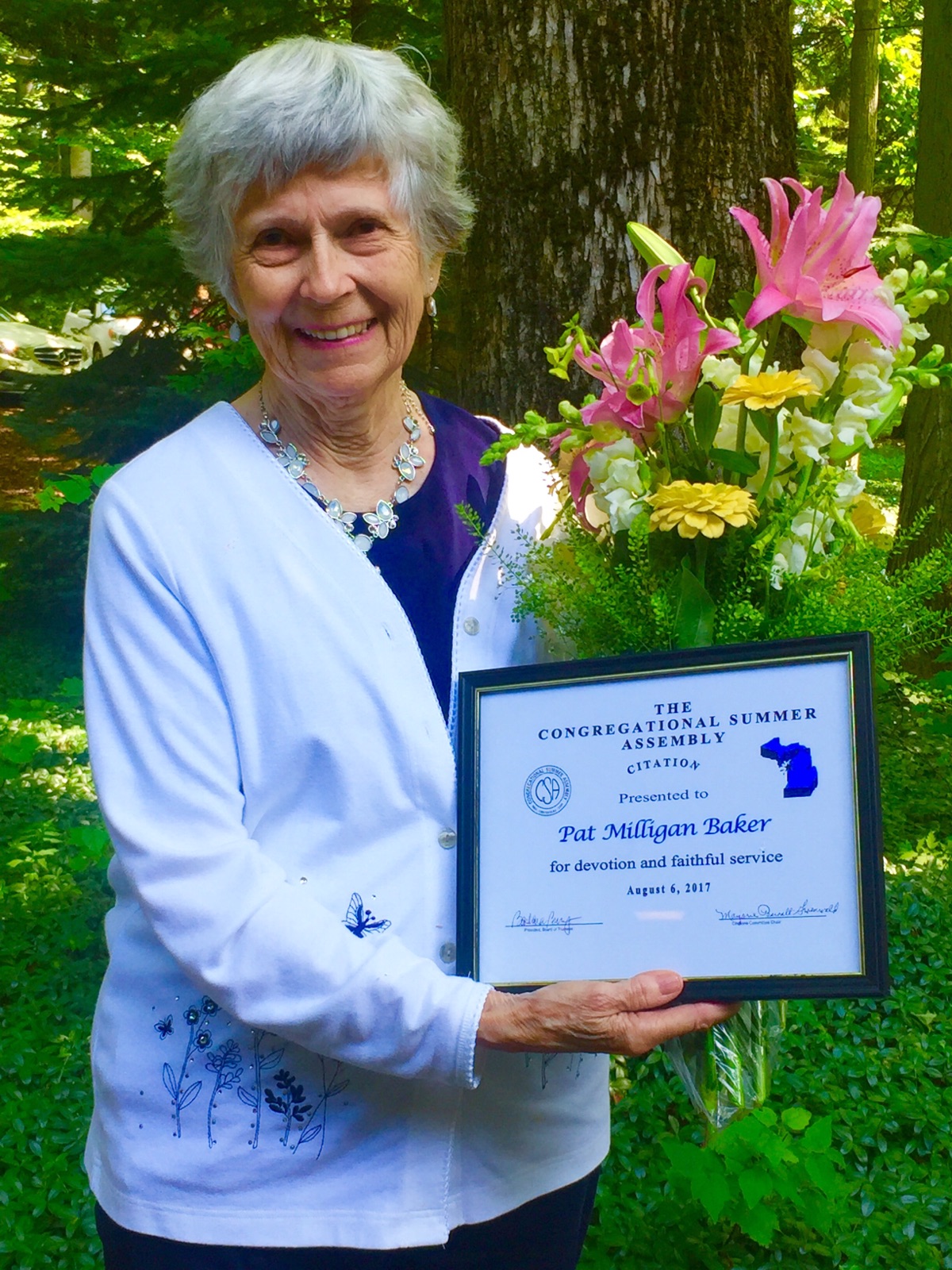 Pat Baker, awarded the 2017 Citation Award, has provided countless hours of service to the CSA in a myriad of ways. Pat was born in Illinois. She was introduced to the CSA by her grandparents who first tented here in 1912 and 1913. After that they stayed in the lodge for several years, and then they went on to build a cottage across from the original meeting house, where she and her brothers enjoyed their childhood and teen summers. She was married after college and as a young mother she did not come up to the CSA for about 25 years due to the interests and needs of her children. In the late 1970’s she returned and rented various cottages until she built her own cottage in 1994. Because of her love of music she promptly re-joined the choir where she was welcomed by the booming voice of her childhood idol, Tom Williams, saying “Well, look who’s back!” She’s been in the choir ever since!

Over the past 30 years she got involved with the Women’s Association and served as Vice President and remembers helping to find speakers for the two “coffee meetings” each summer. She made a square for the Centennial Quilt and helped with the formation of the squares into a proper quilt. She has been on the Crystal View Committee and has been a regular contributor to the gardens located near the Meeting House, the Assembly Building and Crystal View. The road signs on the CSA were all painted by her.

You have seen Pat on the stage in 10 Operettas and she has helped many times with costumes and props. She was part of the chorus which sang the Centennial Concert and she continues to help the choir by gathering, sorting and repairing choir music. She has organized several sing-along evenings and even prepared song sheets for all who came.

She is particularly admired for her devotion to the removal of garlic mustard on the grounds working singly, as well as, inspiring others to join in the fun.

Pat is also an artist, and every year, at the Authors and Artisans Fair, she sells note cards and photos taken by her depicting scenes on the CSA grounds. Her photograph of the Meeting House was donated to the CSA and hangs over the fireplace in Pilgrim Place. One of her photographs is the cover of the Centennial Concert disc.

She is quite a fan of tennis and has participated many times in CSA tennis tournaments. She was the driving force in setting up the Adult Round Robin tennis activity ever week during the summer. She was the powerhouse behind getting the shuffleboard court restored.

It is our pleasure to present the 2017 Citation for Long and Valued Service to Pat Milligan Baker. She is a living example of a person who steps forward to help when something needs to be done!

Citation for Long and Valued Service to the Assembly, 2016 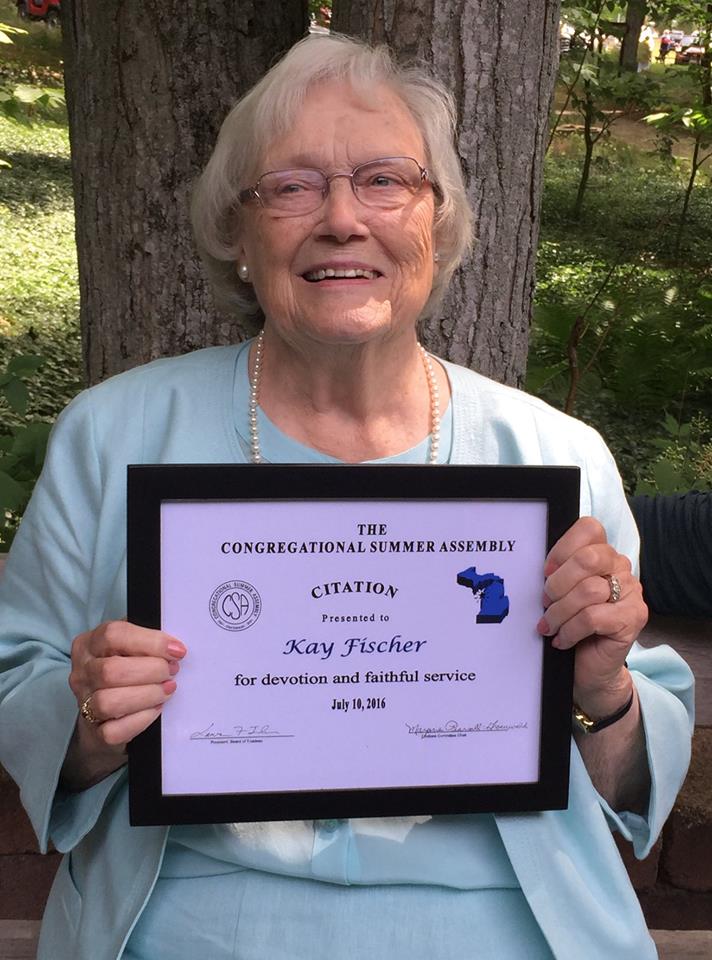 Kay's family first arrived at the CSA on July 1st, 1957, coming from their new home in Iowa City, and were instant converts to the Assembly. This was true even though the cottage they rented that first summer had squirrels scampering around the kitchen at night knocking pans off the shelves.

After two years of renting they bought a lot from the Assembly and built their beloved log cottage, "Red Chimney". Kay fondly remembers walking home in the dark as her husband Harry led them in singing the old hymn "Let the Lower Lights be Burning" while they felt their way along the edge of the pavement until the faint glow of the porch light finally showed them the path to the Red Chimney.

In those years, the Assembly was very much matriarchal - fewer women worked outside the home so mothers and children would spend the summers here while the fathers were home. Kay spent the summers watching their four children on the beach during lessons, urging them on during tennis tournaments, and helping with operettas and dances.

She quickly became actively involved in the volunteer life that is the heartbeat of the CSA, serving as a Trustee, as a member of the Women's Association Board and Committee and was part of the Citation Committee during its early years.

But committees and board memberships come and go. If you want to know the essence of Kay Fischer, you are encouraged to go to the lounge in the Assembly Building and study the Centennial quilt, put together in 2001, hanging on the wall. The large central block, the focal point of the piece, is the visual representation of the Assembly's "then" and "now". There in front of the Meeting House are the transparent ghostly figures of the Assembly's past coexisting with the brightly dressed figures of "now" accompanied by the words "They led the way - we follow still." This was the creation of Kay Fischer - the design for it grew out of her great love and appreciation for the Assembly; the beauty of it grew out of her willingness to share her talent. 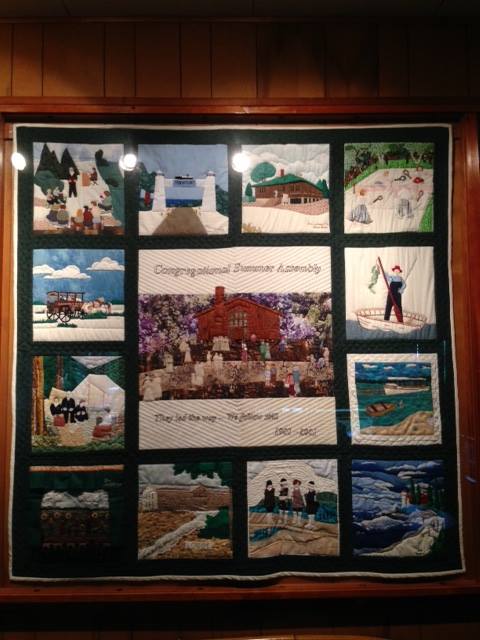